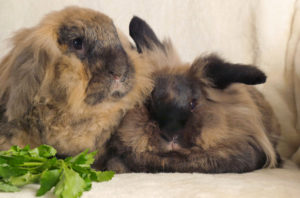 We received a phone call from an RSPCA inspector late in 2013 asking if we could take a young rabbit. The owner was living in a squat in the Durham area with his dog and rabbit. Within the hour, this lovely little bunny arrived with the inspector.

Mischief is such a cheeky soul – such a character and quite naughty hence we named her ‘Mischief.’

She started life in her very own ‘apartment’ here at Bunny Burrows – the big bedroom – which she shared with two boy bunnies, Mercury and Blind Jack.  Later she moved in with Amos until he sadly passed away in 2016.  Now she is living with…

Henley came to Bunny Burrows from a vets in York.  He had to have his front teeth removed and needed a forever home.  With Mischief being so lost and lonely without Amos they seemed like an ideal match.  Both bunnies went together straight away and love each other dearly.  Two big fluffy lionhead bunnies together!