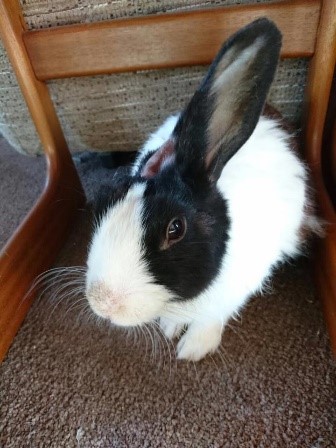 This is Hans. Named after Hans Christian Anderson’s tale ‘The Ugly Duckling’, he truly has become a beautiful swan thanks to the care and dedication of Gwen Butler and her charity Bunny Burrows.

Gwen first heard about Hans in May when she received a phone call from a Veterinary practice asking if she would take a rabbit off them. The rabbit had been brought to the vets by a pensioner who had had him in his garden for a year and no longer wanted him. The vets neutered the rabbit, treated him for an infected nose, and then brought him to Gwen at Bunny Burrows.

As you can see from the photos above, it was immediately clear that he was not a well rabbit. Gwen took him to a veterinary practice she regularly uses, Abbey House vets in Leeds, where she was told by Trudi the vet that his condition was so bad that even they were concerned they couldn’t do anything to help. However, this was not the end for the now named Hans. Gwen begged the vets to do all they could, saying money was not an issue. As a Bunny Burrows volunteer of 8 years, I can tell you this was not a rare occurrence! Gwen is well known for helping animals which otherwise would have been given up on, mostly with happy endings. I have known many rabbits, guinea-pigs, and even tortoises who have been given a second chance of life by Gwen. The vets, having known and worked with Gwen for many years, were also aware of this and so agreed to do what they could.

When they anesthetised Hans, they soon found the cause. He had a huge wound on the top of his skull. An old bite, thought to be from either a dog or a fox. After one day’s work and a bill of £569, he was back home under the care of Gwen and her team of volunteers at Bunny Burrows. He was on daily medication for the wound in his skull and for his teeth, which were also found to be in a terrible state. It was touch and go for a while but Gwen never gave up, even when warned that he would probably have to lose his right ear. As you can see from the photos below, her faith was well rewarded!

Hans now lives with Gwen as a house rabbit, something which everyone who visits is well aware of! As soon as you step through the door into the dining room, he runs up for some fuss. He really is one of the friendliest rabbits I have known in all my time at Bunny Burrows.

Of course he is completely aware of how special he is and how much everyone at Bunny Burrows adores him. He loves to create mischief, pinching treats and chasing Gwen’s dog Hetty, but he really is a loveable rogue. He sits for hours at Gwen’s feet being stroked, comes when she calls him, and even plays ball! ‘In 20 years I have never had a rabbit like him’ said Gwen.

However, none of this has come cheap to the charity. The vet bill has already reached £1,000 and this will only increase as his teeth need ongoing care.