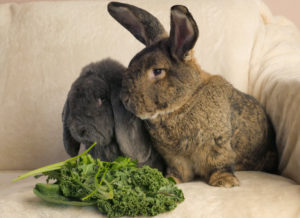 Fritz is a Continental Giant rabbit who came to Bunny Burrows on Wednesday 16th September 2015. He was only 20 weeks old and already a big boy! He came from Leeds from an owner who parted with him because he didn’t get on with her daughter.

Fritz is such a character and thinks he is a dog – the minute he arrived he made himself at home. When he grows into those HUGE big ears, he will be rather large but extremely friendly. He is an Agouti boy, the same colouring as a wild rabbit but most definitely not wild – a gentle giant is our Fritz!

Gigi is a grey French Lop Eared female who arrived at Bunny Burrows 23rd October 2015. She is only 6 months old but another big Bonnie Bunny! Within hours of arriving here at Bunny Burrows, she had set up home with Fritz – they clearly adore each other making the ideal couple.

Gigi was unwanted as she didn’t get on the original owner’s dogs – we found that she got on well with Hetty, the late Bunny Burrows pooch!