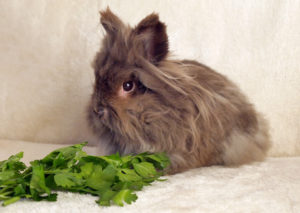 Rupert is a young lionhead male, who has been at Bunny Burrows for a few months . He was rescued by a close friend of the charity after spending his short life on an allotment in the North East, living with chickens his main diet was chicken pellets.

Sadly his teeth are a dreadful mess due to his very poor diet and life style. His front teeth have been removed and his back teeth are continually being monitored. He came with terrible messy eyes due to his poor teeth. Now he lives in a warm building with a group of rabbits and guinea pigs, often seen with a guinea pig on either side of his adorable face each cleaning his eyes.